Poisonous Hemlock vs. My Hemlock Fence

So I’m building a fence. Like any reasonably savvy consumer, I did a little Google-fu magic and figured out exactly what I wanted, then called around town and scheduled a half-dozen people to come out from different companies to give me quotes. As with any industry, in the fence business you get the occasional idiot.

The Lowes guy had already rang several of my alarm bells by the time we got around to this gem (allow me to paraphrase):

“You don’t want to use hemlock rails if you’ve got dogs in the house. Dogs can chew on the fence and hemlock is poisonous. Go with chemically treatedÂ  pine.”

Now, for a lay person who has no medical knowledge and who isn’t supposed to be a knowledgeable lumber sales professional, this might be an understandable mistake. Poisonous hemlock (Conium maculatum) is a flowering plant with parsnip-like roots that is poisonous to humans and animals when ingested because of a powerful paralytic agent. This plant was reportedly used in the execution of Socrates by progressive paralysis that eventually stopped his ability to breath. It looks like this: 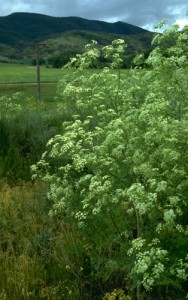 Another group of plants from the parsley family go by the name water hemlock, and these are commonly considered the most poisonous plants in North America. These plants produce a much higher rate of fatality than Conium, but deaths occur due to unrelenting seizures rather than paralysis.

Hemlock lumber is harvested from the Tsuga tree, a Japanese evergreen variety which has a similar odor to that of the poisonous hemlock, and thus the name. The two are about as related as a rattle snake is to a lemur, though. Hemlock wood is not poisonous. (Chemically treated pine, on the other hand, often contains formaldehyde and arsenic to prevent rot and insect damage, and use with animals that chew wood is discouraged.)

While the mix up is perfectly understandable for someone without specialized knowledge, a lumber salesman ought to have known better, and so should a writer who works with the poisonous plants named hemlock as part of a story.

Just in case you were thinking about using that age-old poison Conium (which has also been used by physicians and apothecaries for treatment seizures and as a sedative, but the potential for overdose is very high), here’s a quick list of symptoms of poisonous hemlock toxicity: 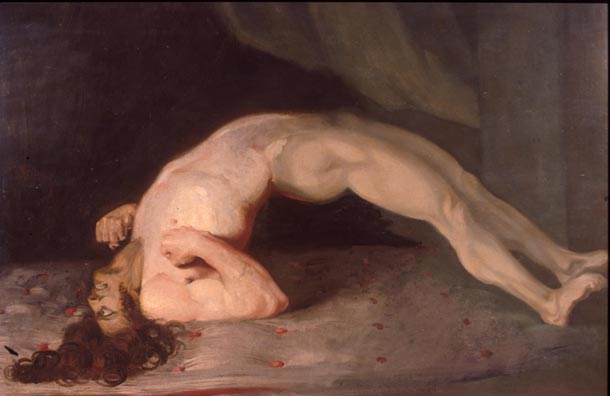 painting of a man suffering from tetanus toxicity

On an administrative note:

Hello readers! It’s been about nine months since my last round of sporadic postings, but I’m hoping to get back on track with this blog, because I love to do it. The contact information in the Ask Your Questions page is still valid.

This blog is written for the purpose of informing writers for realism in fiction. It is not intended to diagnose, treat, advise, or assist real people who have real problems. If you have a problem not related to fiction, please see a physician!

I'm a NICU nurse and lactation counselor, currently on hiatus to pursue a PhD in nursing which focuses on the development of health across the lifespan. I write books, articles, and blogs in between my duties as mom, wife, and student. I own a tool belt, and I'm not afraid to use it.
View all posts by arizela →
This entry was posted in Poison and tagged hemlock, Poison. Bookmark the permalink.

1 Response to Poisonous Hemlock vs. My Hemlock Fence